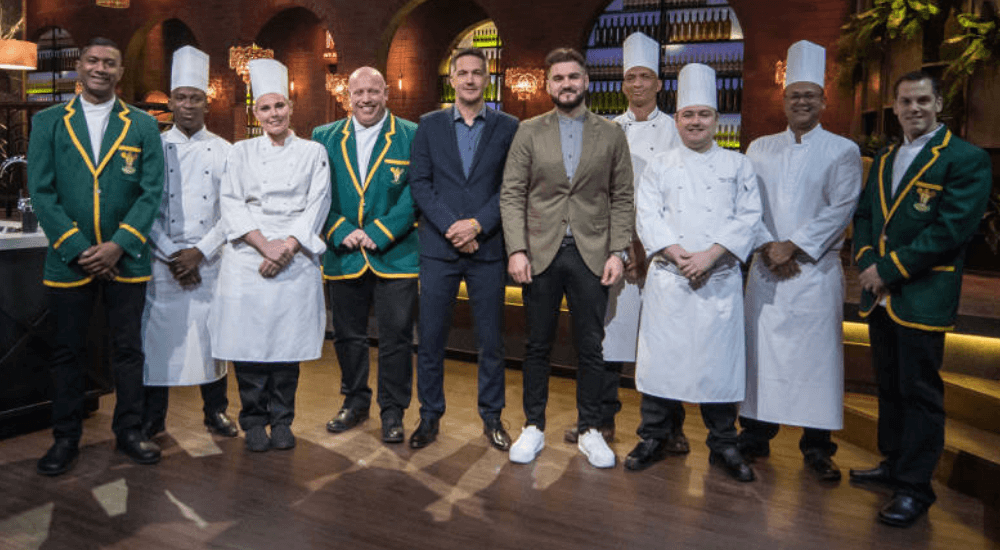 Members of the South African Culinary Olympic squad along with team manager made a surprise guest appearance on the latest People’s Choice Challenge episode of My Kitchen Rules SA which aired on Sunday 2 September on M-Net.

In celebration of Heritage Month, the seven remaining teams competing on My Kitchen Rules SA were faced with another dynamic People’s Choice challenge which took each team to a different destination around South Africa. On arrival at their destination they were tasked with sourcing unique ingredients synonymous with that destination, then returning to the #MKRSA Kitchen HQ for a culinary showdown where the chefs of the South African Culinary Olympic squad were waiting to judge their efforts in a blind tasting alongside the show’s celebrity judges, David Higgs and J’Something.

The eight highly qualified and skilled chefs, who are among members of the squad that may be representing South Africa in the Culinary Olympics in Stuttgart in 2020, were:

The Culinary Squad is a diverse collection of chefs which mirrors the diversity of cultures of which South Africa is proudly made up.

And the judges said…

The ‘Olympic chefs turned judges for a day’ were impressed with the some of the dishes they judged in the blind tasting. Henrico Grobbelaar – who has represented South Africa on an international level a number of times – particularly enjoyed the venison dish and had this to say: “The stakes are high and the prize money is definitely worth the effort in this competition; so I think towards the end of the competition contestants will be able to apply new cooking techniques they have learned throughout the competition.”

Dion Vengatass, who was also a member of the Olympic Culinary team in 2016, commented: “I don’t usually eat tripe unless it has been prepared by my aunt, my grandmother or myself; but the tripe served during our this episode of MKRSA was surprisingly good.”

For some of the chefs it was the first time they were on the other side of the judging process which was as exciting as it was entertaining, but the more seasoned chefs enjoyed it just as much with most saying they did not expect such a high standard.

Is South Africa Ready For The “Smart” Hotel Room?